"A Week in the Snow" Naughty Excerpt

Sorry I haven't had much time to post as of late...that will change soon!

In the meantime, he's a little something naughty from A Week in the Snow. Enjoy!

She climbed off of the snowmobile and took off her coat. Outside the garage the moon had drifted behind the clouds and it was almost pitch-black, but they could still hear the roar of snowploughs, so much closer now. The roads would be cleared by morning, and then they could pull her car out of the ditch, and then…

Rebecca stared at the snow until Richard pushed the button that lowered the garage door. They were left in utter darkness. She listened to him as he moved towards her, the rustling sound of his coat the only indication of his movement. When he wrapped his arms around her from behind, she bit her lip and fought the urge to cry.

“I don’t know what’s wrong with me,” she murmured.

“Maybe there’s nothing wrong at all.”

She shook her head. “I’m not usually this emotional.”

“I knew seeing your car again would be emotional for you. Maybe this is part of it.” 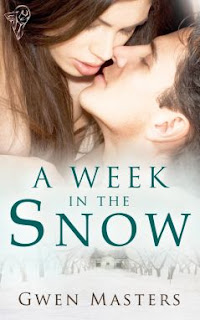 The admission was like fuel to a fire. His desire for her blazed brighter than before, something he hadn’t thought possible. He grabbed her arm and hauled her to the door of the garage, fumbling with the doorknob until she moved ahead of him and opened it for him.

They burst into the kitchen and immediately he took her down to the floor, where she rolled on top of him and reached for the snap of his jeans. Richard kicked them down, even as she stood above him and stripped out of her clothes. There was the sound of a seam ripping, a zipper opening, a swish of fabric on the tile floor, then she was on top of him, guiding him into her with one deep thrust.

At the now-familiar sensation of his cock impaling her as deeply as it could, Rebecca took a deep breath. She began to rock back and forth. There was no gentleness to her as she rode him, and when Richard reached up to touch her, she yanked his hand away. She looked right into his eyes as she slid her pussy up and down his cock.

“You’re mine,” she hissed. “For the rest of my time here, I’m going to fuck you so often and so hard that you won’t look at another woman for months.”

The warmth of her words flooded Richard. It was the balm he had always wanted, but had never really had, even when he’d worn his wedding band. “Show me.”

She sat straight up and ground down hard. Her nails found his chest and drew sharp lines, taking away his breath and leaving raised welts on his skin. He thrust up into her from the floor, raising her up on his hips, and she pounded back so hard it hurt them both. The intensity of the physical taking pushed Richard quickly to his limits.

When he did come, he didn’t hold back. He shouted her name as his cock twitched and spurted into her. She rocked hard on him, getting the most out of it, and when she felt the heat of him flooding her, she reached down between them, touched her swollen clit in just the right way, and came with him. Her pussy tightened on his dick as she threw her head back and cried out, her fingernails bringing blood from his shoulders, her whole body rigid, every muscle tense.

Finally she stood on shaky legs. He sat up and looked around at the kitchen as though he had never seen it before. He held on to the table as he stood, almost afraid his knees wouldn’t hold him, his hand smarting with the motion. As soon as he let go of the polished wood, Rebecca flung her arms around him, almost knocking him back down to the floor.

“Thank you,” she murmured, though she had no idea what she was thanking him for.

**
Want more? Get your copy of A Week in the Snow here. It's available in both ebook and print!
Posted by Angel at 10:18 AM

Labels: A Week in the Snow, excerpts