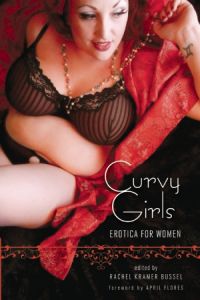 When I got my copies of Curvy Girls in the mail, I squealed with delight. Yes, squealed.

It's safe to say I am very excited about this anthology. I was thrilled from the moment I saw the subject matter (curvy girls!) and of course, the fact that it was edited by the awesome Rachel Kramer Bussel. I've been in many of her anthologies before, but this one? I really, really wanted to be in this one. Perhaps it's because I'm one of those ladies that shops at Hips and Curves. Perhaps it's because I believe the curvier, heavier -- and often, yes, downright sexier -- women don't get a fair shake when it comes to feeling desirable. Perhaps it's because as the years go by, I care less about what people think and much more about how I feel.

And let me tell you, these days, I'm feeling sexier than ever!

I'm going through this book, reading one story each night. It's tough to pace myself, because I want to read it all in one sitting, to devour it like I might go after every inch of a lover's skin with my tongue and teeth and lips. But I am holding back, giving myself a little treat every night, because I want to draw out the pleasure.

My story "Passing the Time" is part of the collection. It's about a woman named Amber, who is puzzled at the sudden lack of affection from the man who said he wanted her. More than that, it's about what she chooses to do about it, and how much she enjoys it. Here's a snippet:

She had all sorts of ideas now, and no one to share them with. She wondered again where he was, and why he hadn’t called like he said he would.
Leaning over with a sigh, Amber put the lotion on the windowsill above her bed. As she did, her gaze landed on the space beside her nightstand.
On the little red box peeking out from under the bed.
In that box resided a variety of adult toys, from vibrators to dildos to pearls to clamps. She looked at the box for a very long time. In all her concern that her boyfriend didn’t feel the way he once had, her sexual desire had taken a vacation. She had played with herself the day before and found that the resulting orgasm wasn’t worth the time. It was nothing but a thin, joyless spasm of physical release that left her feeling even worse than she had before she started.
But as Amber looked at the box, she started thinking.
First she got sad.
Then she got angry.
Then she got busy.
She yanked the box out from under the bed. Something in there rattled—batteries, probably. She opened the top and looked at the first toy there, the dildo that looked quite a bit like her boyfriend’s cock. She picked it up, testing the weight of it in her hand. She looked at the phone. It sat there silently, mocking her hopes that she would hear his voice while she contemplated exactly what she was going to do with that toy.
Because she was going to do something with it, by God.
Something kinky.
She closed her eyes and took a deep breath. The plastic had warmed in her palm. It still didn’t have the heat her boyfriend’s body did—what could? —but it would do in a pinch. And if this wasn’t a pinch, she didn’t know what was.
Her hand drifted down her chest. Her nipples were hard and hurting already. She ran her hand along where he had been, traced the bruise his tongue and teeth had left there a week ago. She shifted in the bed, lay down on her back and let her fingers walk all over her skin. It was slick from the lotion, warm from the shower. Goosebumps rose everywhere when she thought of the kisses he had bestowed on the back of her neck, of the way he had kissed her ear and made her sigh. She touched all those places and then some, and hardly realized her other hand was moving up and down on the toy in long, fluid strokes.
Her legs shifted. Her knees opened. She slid one hand down between them, careful not to touch the most sensitive places. She loved the way her legs felt. The smoothness of them was delightful, and she lingered there. Soon she was moving a little, pushing her body up to meet her hand. She spread her fingers and slid them between her legs.
She was wet. A tiny moan escaped her.
She lifted her hand to her lips, licked first one finger, then another. She moaned again, a low and secret sound, something for herself alone. She tasted sweet, maybe even a little more than usual. She suddenly remembered the toy in her hand and was surprised that she was stroking it. She slid it across her thigh and let out a shuddering breath. She wanted to be filled, to be slammed hard, to be made love to. All at once.
She pushed the toy against her clit. Her moan was louder this time, and the sensation rolled through her with the force of a fast-moving wave. Good grief—had she really been that tense? The relaxation and the tension combined together, made her struggle to move slow.
“Slow,” she said out loud, taking a deep breath. The toy slipped against her clit, back and forth, warming even more as her wetness spread over it. She arched up and took the tip inside her lips. Her pussy was as smooth as her legs were. The wetness flowed unchecked across her lips and down the crack of her ass. She would have to change the sheets later. She didn’t care.

And she finds all sorts of other naughty things to do from that point on...want more? I'll stop teasing you and give you the link to go get one of your own.
Posted by Angel at 7:31 PM